Fortunately, as part of the weekly CSA newsletter, they included a recipe for a kohlrabi couscous which ended up being delicious!

Can’t wait to see what this week’s box brings!

This summer Jess and I have purchased a share in a CSA (community supported agriculture) and we’re already two boxes in. Already we’re really enjoying the variety in food. I’ve liked the challenge of using unfamiliar foods (like Komatsuma) and building out new meals around them.

Each week we get a list what’s going to be in our box, here’s what last week’s included:

Good stuff for salads this week, though the garlic scapes inspired an interesting pasta dish. We also made a pizza (on the grill) which included some of the kale. The boxes will have more stuff as we get into the season further, but this has been a nice way to start out. I’m excited to see what comes this week!

It’s been a year and a half ago since I published my first tabletop game: That’s Mine. It was a fun experience and it’s been cool to see people learn and play it. I’m not setting any game sales records, but that wasn’t exactly my aim. The process of making a game lets me exercise a bunch of creative muscles I don’t often enough get to flex. Balancing the game mechanics, rules, theme, artwork, physical production, project management, marketing, and many other skills is challenging, especially on a project that I’m basically doing “for me” and not because I think I’ll strike it rich.

This is on my mind because I’m in the midst of putting together my next game. It’s a card game that’s about road tripping around the US and putting together the best photo collection from your adventures.

As an example of some of the creative challenges, take something like card design. How often do you look at the details of a card? I mean all of the little wiggly details that make the game feel polished? By no means am I a real artist, but I do find it fun to analyze some cards from games I like, then try to reconstruct an original design using the same kinds of visual interest. Below is the card design I worked on last weekend in several states of development. The cards will represent the notable places on the road trip, with a value, description, and picture.

The iterative progression through development

A few things worth calling out in each:

The image file has a TON of layers in it, but that will save me time later since there are 5 different card colors (not just red) and some other subtle changes. That’s the fun and creative challenge of the process…making the layout AND making it flexible and as reusable as possible.

I’m sure I’ll be posting more about the game here as I make more progress, but if you’d like an email when I’ve finished it just fill out this quick form.

Hello again! The big news is that Jess and I welcomed our daughter, Emelia, to the world at the end of January! She’s doing so well and I can’t help but share a quick photo as an update 🙂 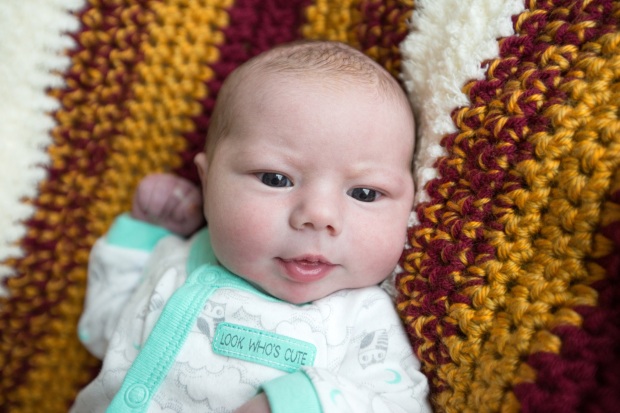 Note the maroon and gold in the background…

Now that a few episodes of both the Gateway Game Shelf podcast and Game Shelf Campaigns podcast have dropped I’ve listed both on iTunes. After a few days of waiting I received the official notification from Apple that they’re live on iTunes. Huzzah!

Makes it feel so real…

Quick update: I’ve finally started producing a couple of podcasts. I’ve had lots of podcast ideas, but most have not gotten off the ground because of various setbacks or uncertainty on my part. That said, I’m very happy with how these are coming along.

Both podcasts are about tabletop gaming, with different audiences in mind for each. Details (and links) are below for your perusal.

The Gateway Game Shelf – Jess and I discuss the games that we play with non-gamers to introduce them to the hobby. The intent of this podcast is to be a limited-run series with a focus on a handful (10 or so) core games that really fit the sweet spot for a non- or new-gamer. Release schedule is bi-weekly until we cover the games we have in mind. Currently the “introductions” and “Ticket To Ride” episodes have been released with more to come.

The Game Shelf Campaigns – In this podcast we follow multiple sessions of a campaign-style tabletop game. This is tilted more toward the person who wants to either a) listen to some actual-play of our rather cerebral group’s play-through of Pandemic Legacy, or b) hear our pre/post game thoughts for each playthrough. Release schedule is bi-weekly (off weeks from The Gateway Game Shelf). Currently the “introductions” episode is up, while future episodes will include two recordings each (the audio from the actual play and the between-game discussion).

It’s been a while since my last post here. Probably the longest I’ve gone in almost 10 years of personal blogging. Lots going on and the tough thing is that I miss getting posts out here but have been stuck on what of the many things is best to expand on here.

Not that I haven’t been blogging. In fact I’ve posted several to the Hitachi Solutions blog (1-2 per month) so I’m not completely absent. That said, it’s not the same as posting here.

I want to find a way to use some of my travel time for blogging/content creation. I’ve logged over 50K miles in travel this year. While that doesn’t put me among the top tier road warrior status, it’s still been a heck of a lot considering all but one trip have been domestic. That’s meant a lot of airport time. When I’m not working at the airport I’m escaping with a book, but I need another go-to option that’s a little more creative.